This is part 1 of a 2 part series on Gompertz’s law.

After enjoying a podcast interviewing Moshe Milevsky, I got interested in Milevsky’s work and read his book The 7 Most Important Equations for Your Retirement.

It’s a bit of a weird book. I can’t say I didn’t enjoy it. But it gave me the impression Moshe Milevsky didn’t expect his readers to enjoy the book, or at least he didn’t seem to expect them to like the formulas. That seems like a weird proposition for a book with “equations” in its very title. Perhaps the readers were imagined to be part of a captured audience of students, asked to read the book as an assignment? At any rate the author apologizes every time he actually discusses formulae, and having to resort to logarithms seems to make him positively embarrassed.

Then again, Prof. Milevsky wrote many books and this is apparently one of his bestsellers. And the anecdotes of Fibonacci, Gompertz, Halley, Fisher, Huebner, and Kolmogorov1 in the book are lovely, as is Milevsky’s account of his experience of economist Paul Samuelson. Perhaps the professor just knows his audience.

But so do I, being well acquainted with the empty set. So there’s no issue with too much math on this blog.

Let’s therefore discuss what Milevsky doesn’t do in his book and try to explain why his equation #2 might be true: Let’s talk about the Gompertz distribution. 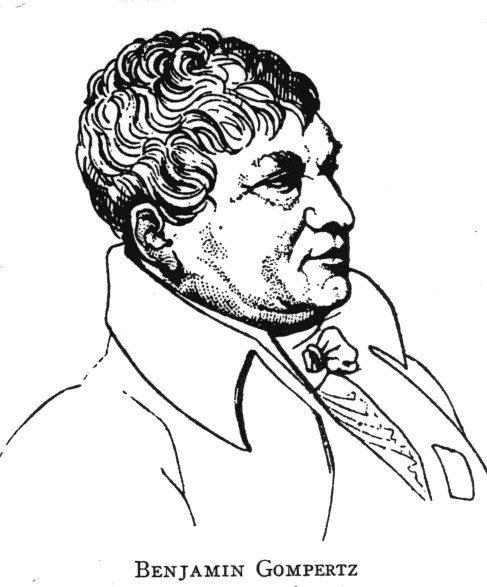 Benjamin Gompertz (1779–1865) was a British mathematician and actuary of German Jewish descent. According to Milevsky, Gompertz was looking for a law of human mortality, comparable to Newton’s laws of mechanics. At his time, statistics of people’s lifespan were already available and formed the basis for Gompertz’s discovery. For instance, one could compile a mortality table of a (hypothetical) group of 45-year-olds as they age. The data might look like this:

What does this tell us? It doesn’t immediately tell me anything not very obvious: The older one gets, the more likely one dies soon.

But let’s compute the mortality rate: How likely were people to die at a given age in this cohort? To be precise, we compute “Which proportion of people alive at age \(t\) died before age \(t+1\)?”

So again, so much so obvious: The probability of dying the next year, conditional on having lived until the current year, increases with age.

But how much does it increase? This is Gompertz’s discovery, now called Gompertz’s law: The mortality rate appears to increase exponentially. One way of seeing this is to take logs and compute their difference:

The difference in log values increases by about 0.1, regardless of the current age. Since \(\exp(0.1) \approx 1.1\), this works out to roughly a 10% increase in the mortality rate per year.

According to Gompertz’s discovery, the likelihood of dying in the next year (conditional on having lived until this year) increases exponentially by a fixed percentage every year.

How do we model this mathematically? And if Gompertz’s law has a rate growing by a rate, how come everything stays a probability, i.e., \(\le 1\)?

Keep reading to learn about hazard functions and find out!

If you have taken a probability or statistics course, you probably (ha!) know about probability density functions (pdfs). A pdf is a positive function that we use as a density and to make it a probabilty density it needs to integrate to one. If \(f\) is a pdf and \(X\) is a random variable with that distribution then

While pdfs are positive and integrate to \(1\), cdfs are positive, \(0\) at \(0\), monotone (non-decreasing), and \(1\) at the limit to \(\infty\). They are also typically assumed to be right-continuous. To compute the previous expression one can then take

Moreover the fundamental theorem of calculus tells us that (barring a few exceptional points),

What this means is that the cdf determines the pdf and therefore the probability distribution itself: Any function \(F\) with the properties above can serve as a cdf and gives rise to a pdf \(f\), and vice versa.

If you made it this far, you likely knew this in principle. So on to hazard functions now (which I learned about from Wikipedia only recently).

Suppose we made it until some time \(t_0 \ge 0\). How will the future look like? We will need to condition on having lived so far and renormalize with \(S(t_0)\) to get the pdf going forward. This is the same as finding the probability of not surviving an additional infinitesimal time:

This is the hazard function, also known as force of mortality or force of failure. It takes positive values and the last equation indicates that it will not be integrable, i.e., \(\int_0^\infty h(x)\dx = \infty\).

There is also the cumulative hazard function, which is

This means, just as any one of a pdf or a cdf determines the other, so does a hazard function: Given either a pdf, a cdf, or a hazard function (or a cumulative hazard function), the probability density and therefore all of these functions and the entire distribution are uniquely determined. The criteria for \(h\) are: (1) being nonnegative and (2) not being integrable.

So how do we model Gompertz’s discovery? We choose the most simple exponentially growing function we know and take it as our hazard function:

where \(\eta, b > 0\) are parameters to be determined from the data (see below). This also tells us why our “rate increase of a rate” doesn’t lead to probabilities greater than one over time: It’s a rate increase for the conditional probability at that fixed point in time \(t_0\). The hazard function itself does grow to infinity.

Given this, what is the cdf for this Gompertz distribution? Well,

So the simple exponential choice for the hazard function yields this not quite so simple double exponential as a pdf for the Gompertz distribution.

The pdf, cdf and hazard function of the Gompertz distribution for some choices of \(\eta\) and \(b\).
(See above for source.)

We could proceed to compute the mean, variance or moment-generating function (aka Laplace transform) of this distribution, but the math gets somewhat hairy and special functions (mainly the generalized exponential integral, a special function related to the incomplete gamma function) are involved. We will return to this for other reasons in a future blogpost. The infobox on Wikipedia has the data if necessary.

For now, let’s note that \(h(t) = b \eta e^{bt}\) describes a hazard function where the chance of dying in the next moment increases throughout life, but there’s only this time-dependent component. If there are time-independent causes of death or failure (war, some kinds of diseases, voltage surges), one could consider modelling this differently. William Makeham, another British 19th century mathematician, proposed such an addition via the hazard function

The result is known as the Gompertz-Makeham distribution.

As simple as this change may seem, it does complicate the resulting integrals quite a bit. So much so that finding closed-form expressions of the quantile function or the moments of this distribution is still an active field of research!

Gompertz from here on out

If a random variable \(X \sim \textrm{Gompertz}(\eta, b)\) describes the expected time of death of a newborn (or, less morbidly, the expected time of failure for a newly built device), how does the world look like at time \(t_0\)? That’s an important question for, e.g., retirement planning.

So let’s compute the pdf after surviving until \(t_0\):

This is the pdf of \(\textrm{Gompertz}(\eta e^{bt_0}, b)\). So the future stays Gompertz-distributed with new parameters. This is a useful property of the Gompertz distribution: truncated renormalized versions of it stay within the family, in contrast to, e.g., the Gaussian distribution.

This helps us answer questions like “How long will I spend in retirement?”, which is why Milevsky discusses Gompertz in his book about retirement planning.

How to fit the data: Modal value of human life

The modal value(s) of a distribution is the maximum (or set of maxima) of the pdf. In general, it is distinct from both the mean as well as the median. In the case of Gompertz it’s also an easy computation:

The \(b\) parameter we also get from the data as it determines the year-on-year increase in the mortality rate: From the data above we would estimate \(b=0.1\). Milevsky suggests using \(1/b = 9.5\) years and calls this the dispersion coefficient of human life.

Plugging it all together

while the cdf is

Therefore, the survival function conditioned on having lived until year \(t_0\) is

In a future blogpost, we will use this to compute values of annuities. For now, let’s wrap up with a quick discussion of how realistic this model is.

Is this model any good?

The first thing to say is that sadly, human babies are more likely to die than the Gompertz distribution would indicate. That’s partially a sad fact of life and partially a consequence of the fact that severe medical problems in unborn babies or during birth are less likely to cause outright death at the point of delivery for the baby in question, but may still cause death after a few days, months, or even years.

On a potentially more positive note, the Gompertz distribution might overestimate the chance of dying next year for very old people. As Wikipedia has it:

Generally, there seems to be consensus that the Gompertz distribution models mortality really well between the ages of 30 and 80.

A question very dear to “transhumanists” is to what extent the gains in longevity seen in the last centuries can be expected to continue to happen in the future. Obviously a simple two-parameter model won’t tell us a lot about that, and neither will the three-parameter Gompertz-Makeham distribution. Still, I found it interesting if a bit discouraging to read, again in Wikipedia:

So apparently \(\eta\) and \(b\) have been stable over a long time periods. Whatever that says about human longevity, it also says the Gompertz (or the Gompertz-Makeham) model is not so bad.

That’s it for today. My apologies for not actually having any \(\pi\)s in all of this after all :)